This is a very basic page for Inktober 2021. Probably I'll make it look nicer, but I'd rather get drawing first. Updates will be in batches, since it's easier for me to scan and upload in one go.

If you're not familiar with Inktober, it's basically drawing something complete every day for the whole of October. You can use a prompt list or make it up as you go. Originally you were supposed to only use inks, but it's anything goes these days. 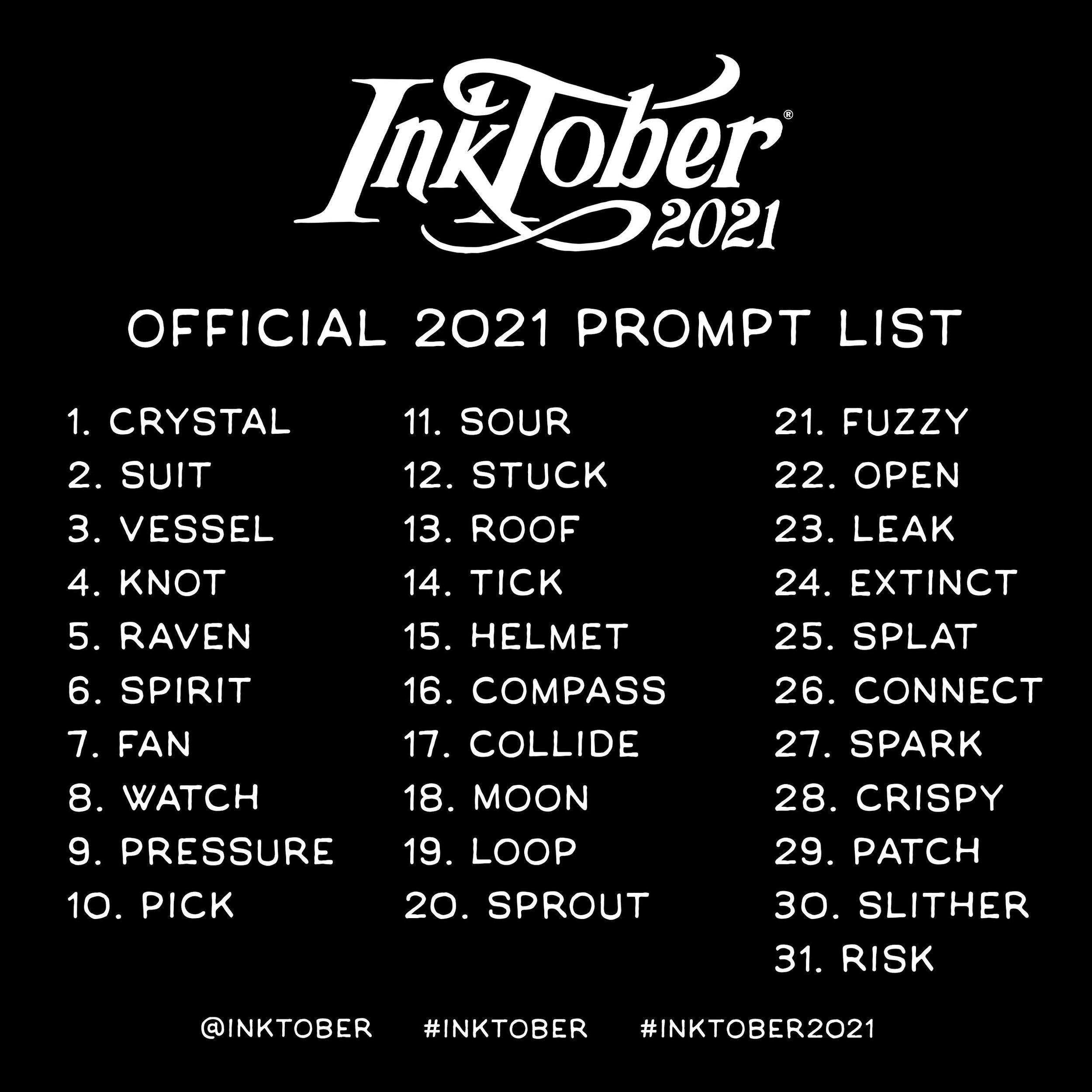 If you want to join in the fun, drop me a link to your inktober page in the comments of my site profile

*Yes, I know Jake Parker has a ton of Twitter drama and some people have cancelled him. But it's not like he's getting any clout from a few of us using his prompt list. 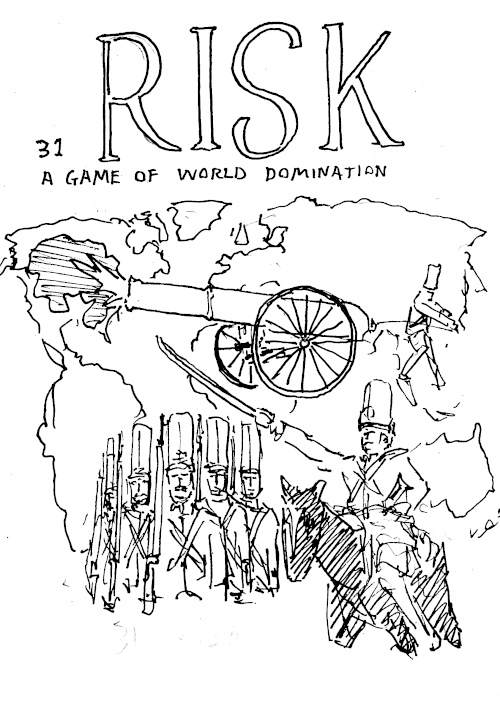 By the end of inktober, I had a ton of work deadlines and I was totally burnt out on other stuff. The result was a really loose and fast sketch of stuff I remember from the Risk boardgame. 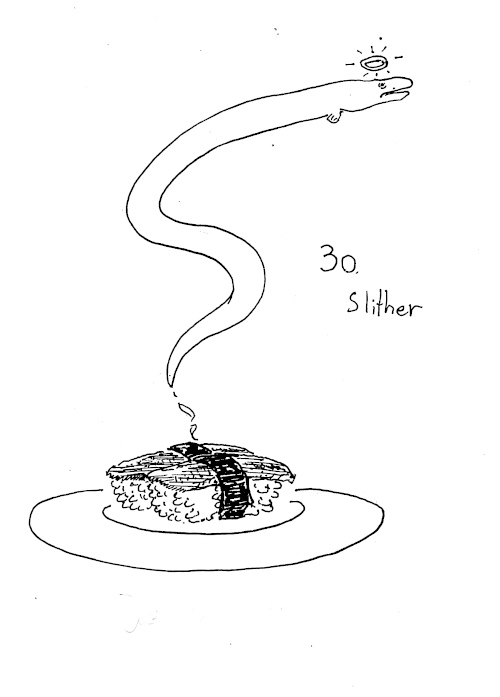 At this point I was really worn out, so I started skimping on the quality. First thing that came to mind was Unagi. Also I didn't want to draw a snake. Unagi is delicious. 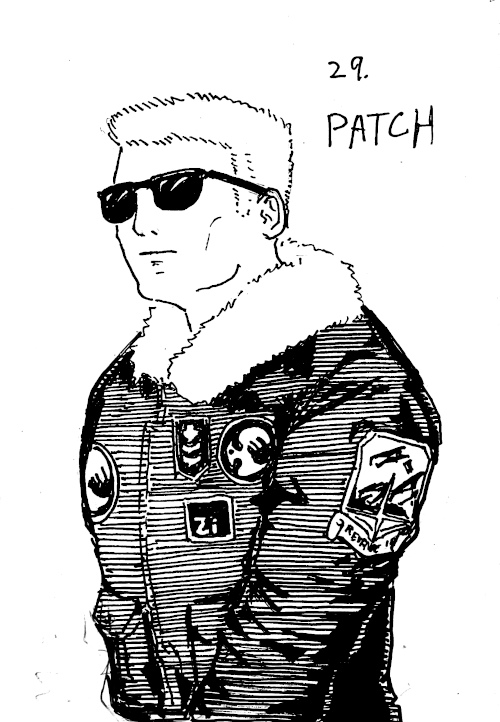 I wanted to draw a Top Gun style bomber jacket. 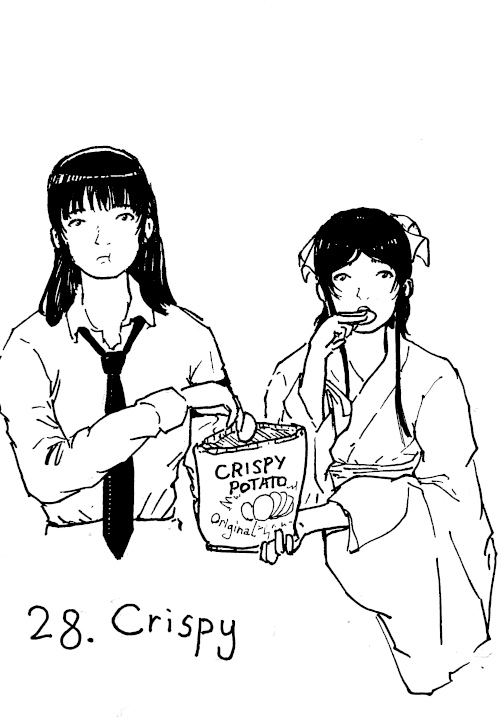 I like how this turned out. Using actions and facial expressions to express a subject. This is my favourite drawing of this batch. 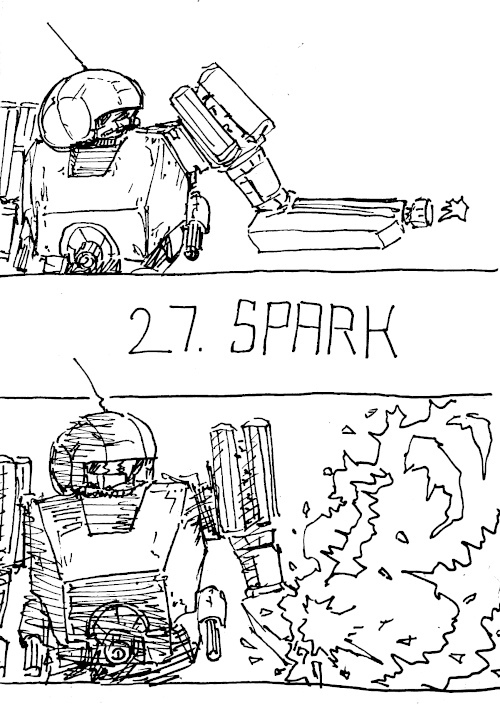 Wanted to try more action scenes, so this is a Firestarter Battlemech from Battletech. 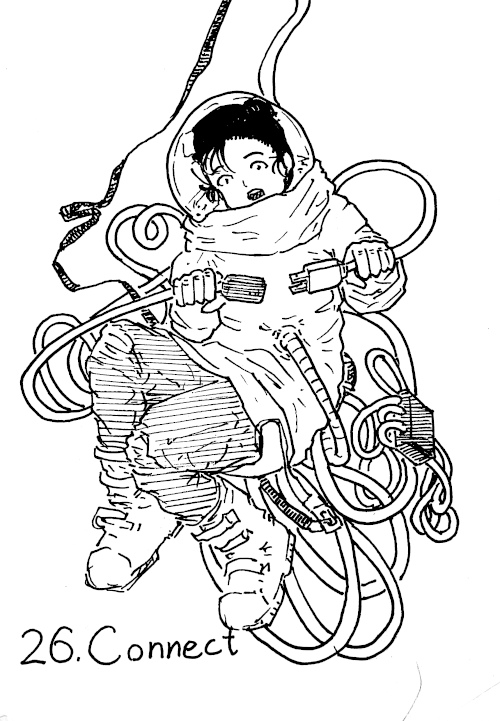 I like drawing spacesuits. The composition is a bit inspired by the art of Akihito Yoshitomi. 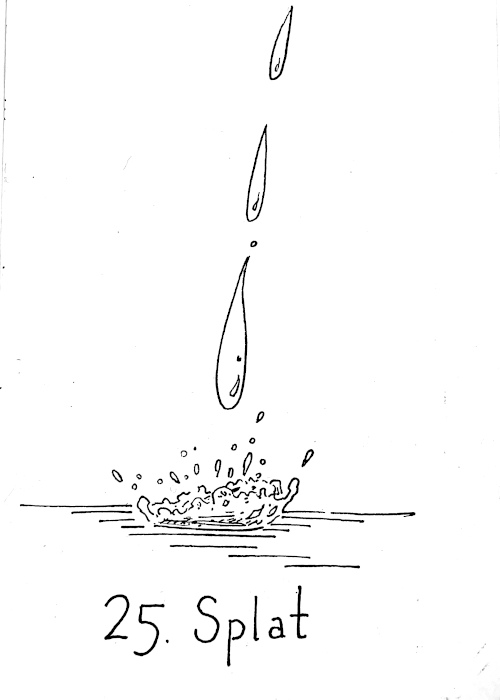 This one was a bit half assed. I was busy and tired. 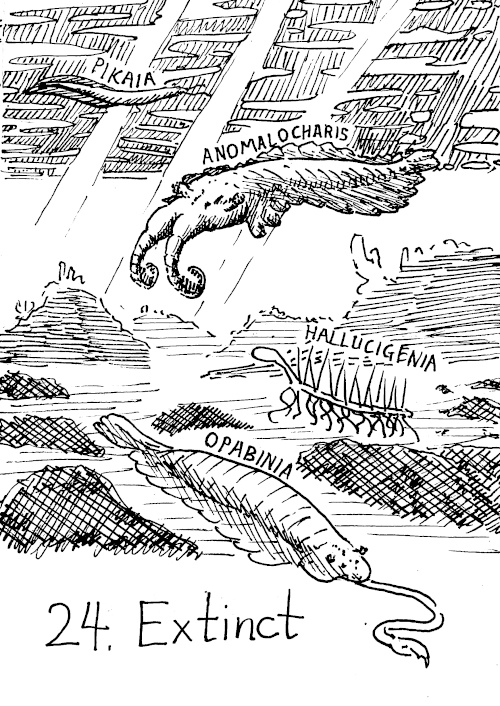 A grab bag of Cambrian animals. 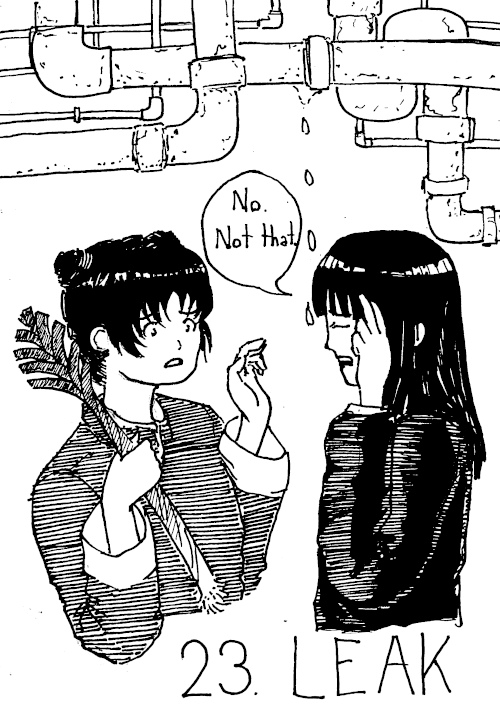 I had fun with this one. Pretty much drawing whatever I wanted in a more comic style. 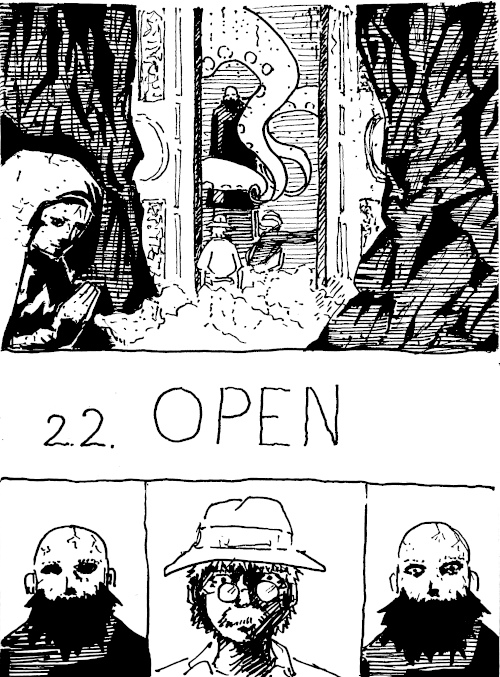 This one was influenced by Mick Mignola's Hellboy. 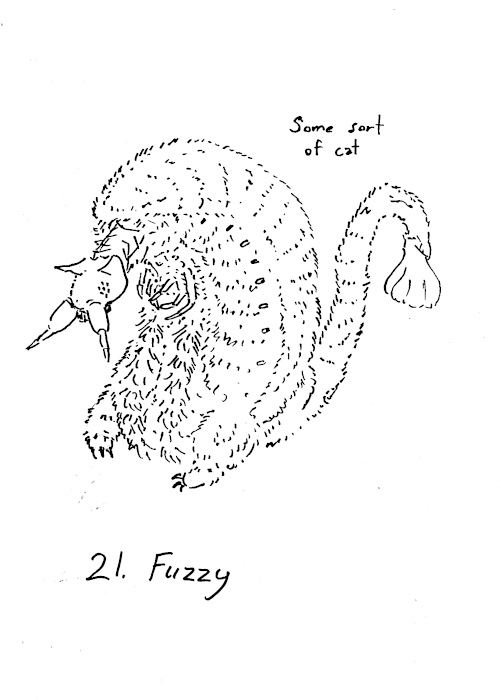 Some sort of cat? I was looking at too many larvae when I was drawing this. 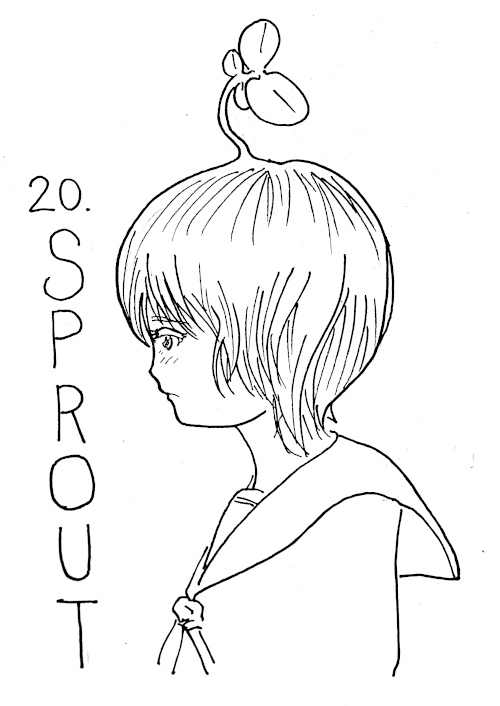 This was a lazy one. Not much thought went into it and I just wanted to get it over with.

Update 19.10.2021: Almost the 2nd third of the way. I'm really worn out due to a crazy schedule this month. Fortunately I like drawing so Inktober doesn't feel like chore, but I haven't had the time and energy to do well planned and executed stuff. Mostly it's been whatever I've been able to do during meetings and after work. You can quite easily guess the days where I'm busy and where I have the time to draw. 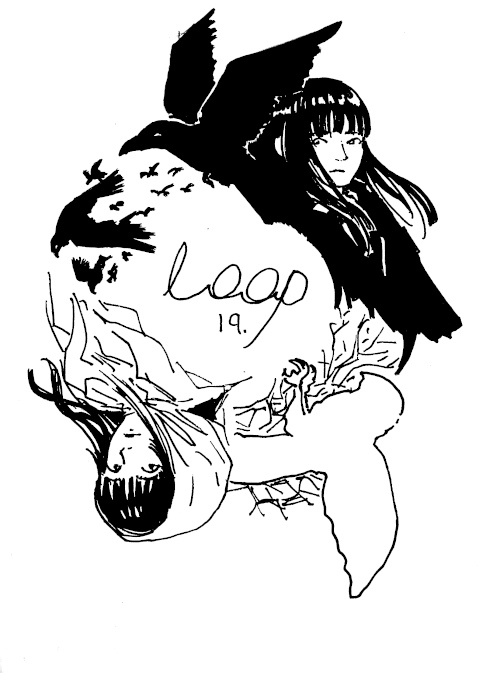 Loop, circle, recursion. It's just an excuse to draw birds and heads. Stuff within my comfort zone. This is based on something I sketched out in 2020 but never completed. 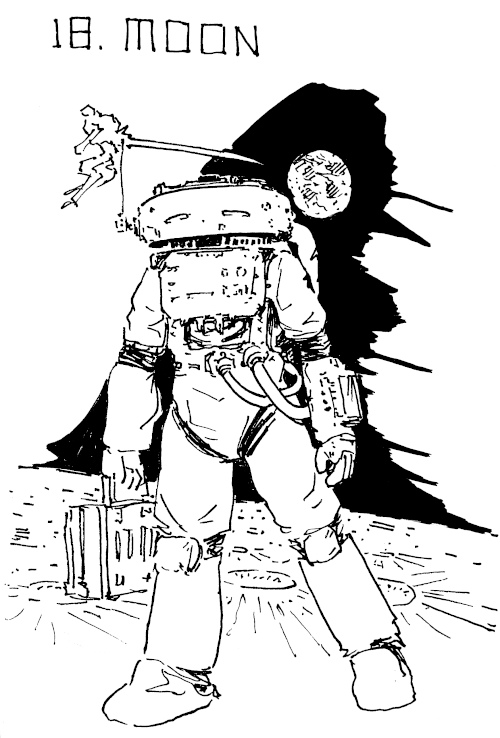 I had to do some work, but I could barely think. So I drew instead. Drawing sci-fi doesn't take a lot of brainpower for me. Only a splotch of black because I didn't want to spend too much time filling in blacks. Partially inspired by the Moonrace space suits in Tun A Gundam and Soviet EVA suits. 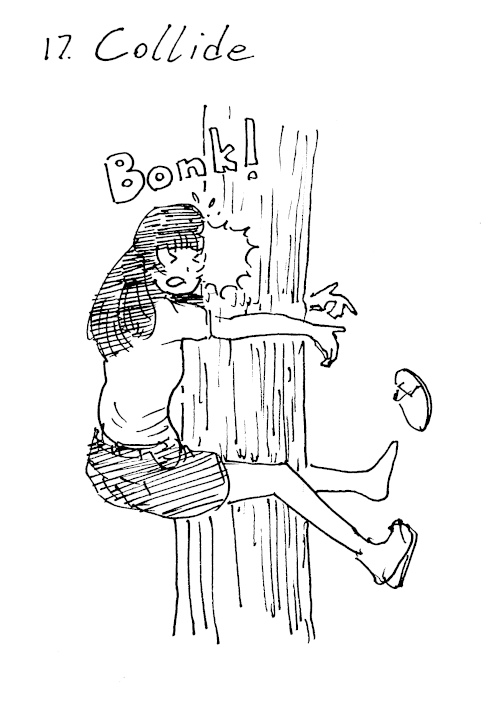 I was tired and I had 10 minutes to do this. Turned out ok for what it is. 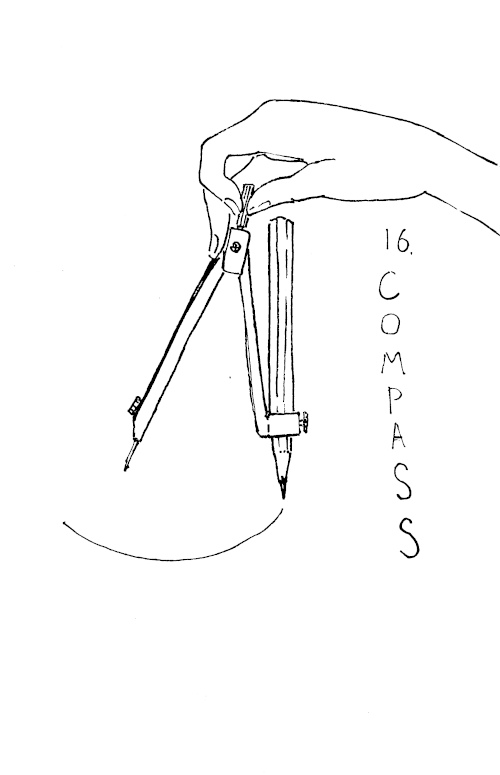 When I saw the prompt I thought, "I'm not going to draw a circle". So I settled for one of those circle drawing things instead of those things that point north. This was a quick sketch. 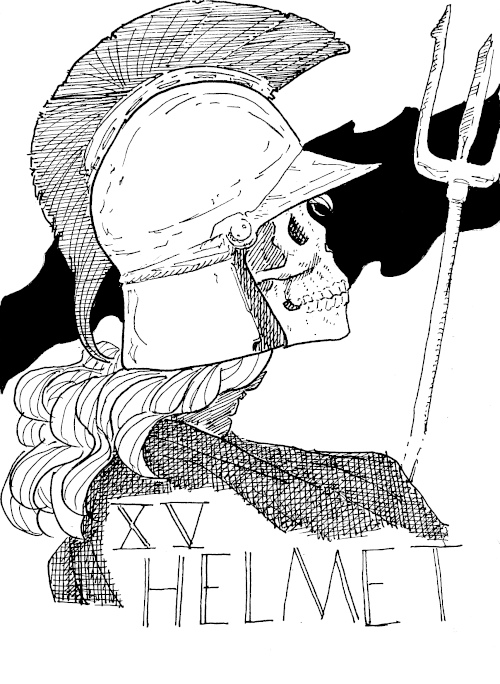 Wanted to do a cool helmet, and instead of a face I drew a skull because skulls are cool. The design is based on Britannia, the national personafication of Britain. Bringer of misery to the lands where she sets foot. 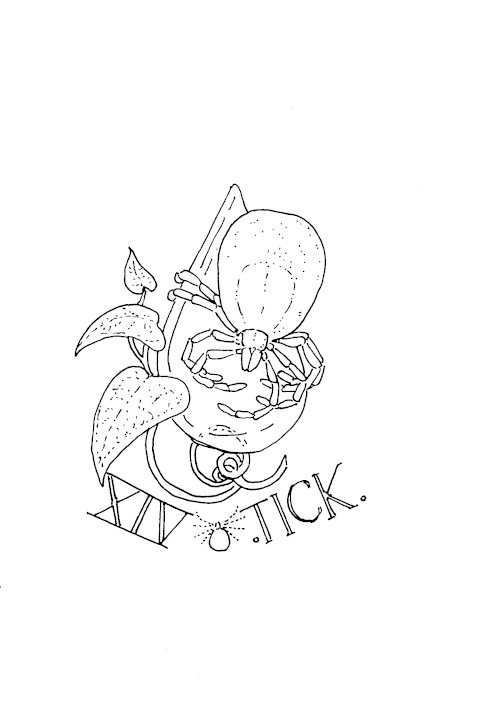 This was a response to the very time consuming filling that I did the day before. I went for something more simple and light. Successful Inktobers involve knowing when not to push yourself too hard. 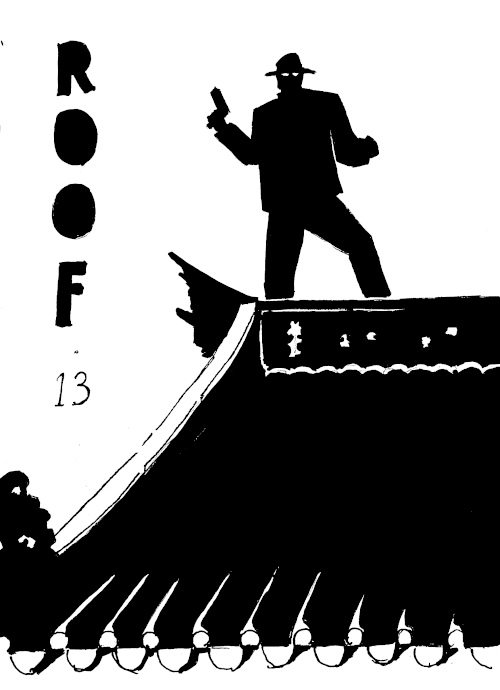 The first thing that came to my mind for a roof was the opening of Batman the Animated Series. I needed some distinct silhouette for the roof, so I went with Chinese temple roof. I regret using so much black, filling it in with ink was a pain. 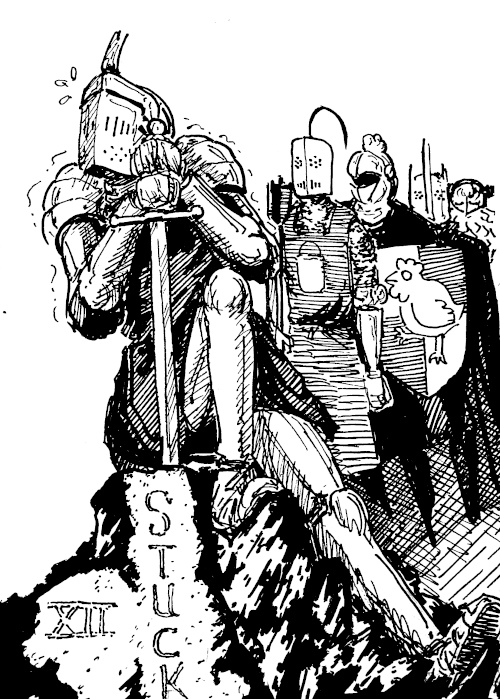 Wanted to do something fun and medieval. The armor was referenced from the idealised plate armor in Pre-Raphaelite paintings. 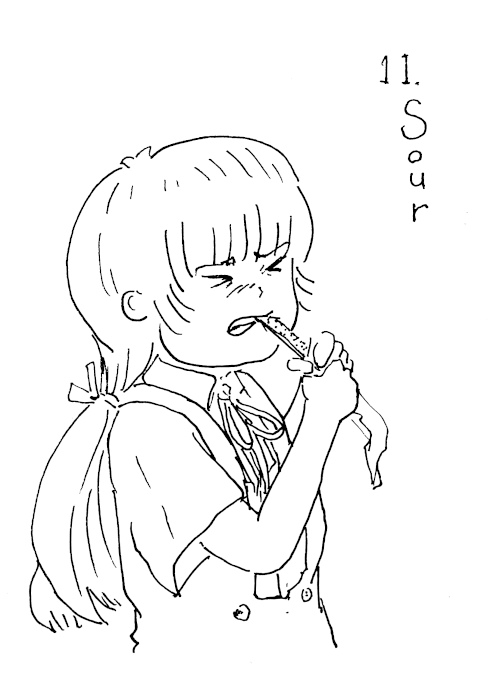 I was super tired, so this was a 5 minute sketch that didn't turn out so good. Inspired by a strip of sour candy that I ate recently.

Update 10.10.2021: In the blink of an eye it's already the 10th day of October. Been a bit busy with work, but I managed to put the time in to get some art done every day. Mostly by keeping my hands busy during video calls and meetings. Meetings aren't such a waste of time when I can draw on the side. I dread having to return to in person meetings. 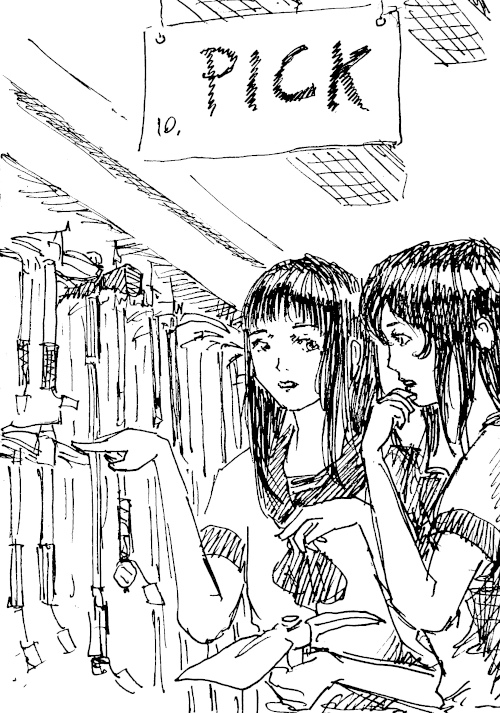 After drawing really controlled lines for the past 9 days I let loose a bit today. A bit inspired by Jiro Matsumoto's energetic sketchy style. 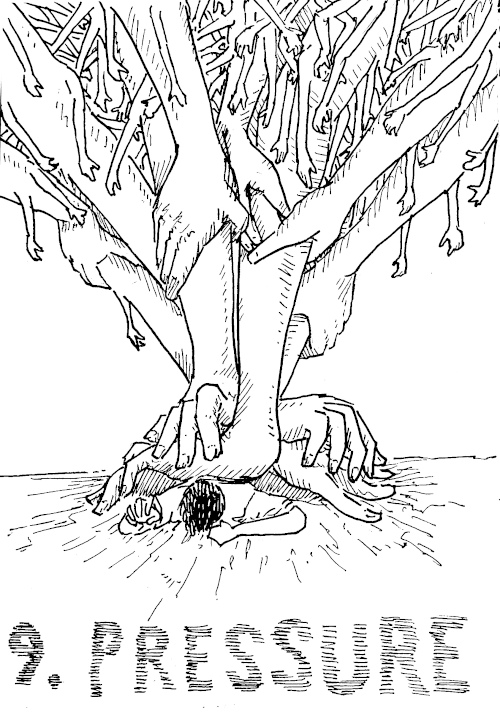 Completed this during a meeting that dragged out for too long. Going for body horror imagery but in hindsight the hands look too clean. Most of the hands were drawn from memory, so they turned out quite well for what they are.

I draw these things in a small 16 page booklet of A5 sized pages, these two were at the middle spread so I'm featuring them together. I wanted to do something really chaotic with Fan, so I drew as many fans as I could think of. For contrast I wanted a more contemplative and calmer illustration for Watch, so there's a lot less action on the page. Hopefully my intent to hint at a pocket watch from the hand gestures communicates well enough. 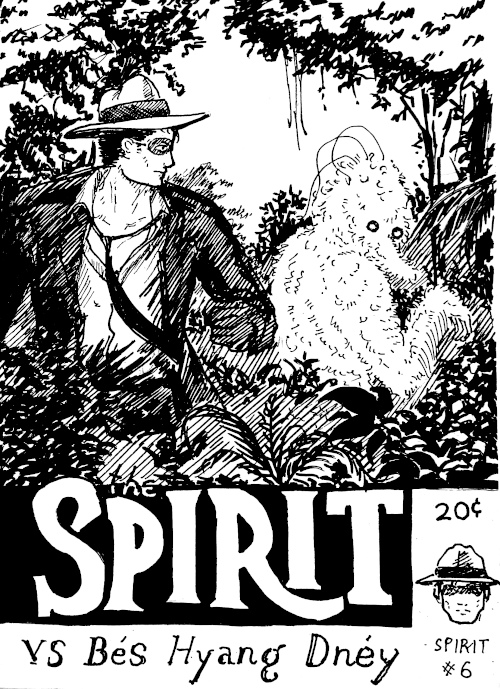 My influences were all over the place with this one. Partly drawing inspiration from Will Eisner's 'The Spirit'. The Bes Hyang Dney is an obscure jungle spirit from the folktales of the Jah Hut tribe of Peninsular Malaysia. It ended up looking a bit like a muppet. Doing lettering once in a while is good practice. 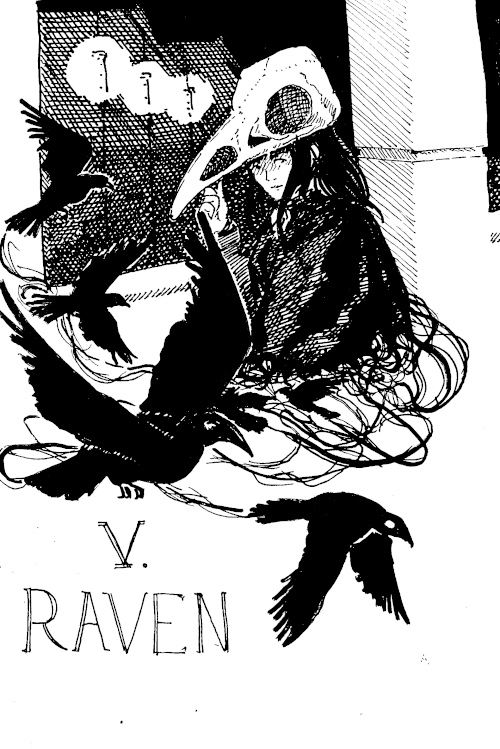 Tried something a bit more detailed. Using a lot of black looks good, but it's a pain to fill in large areas. Ravens have smaller beaks than crows. The character design is somewhat inspired by a garage kit by Hiroki Hayashi.

Update 4.10.2021: Off to a good start. I'm pacing myself well and not forcing myself too much. Most of these took 1 hour to do from sketch to inking. 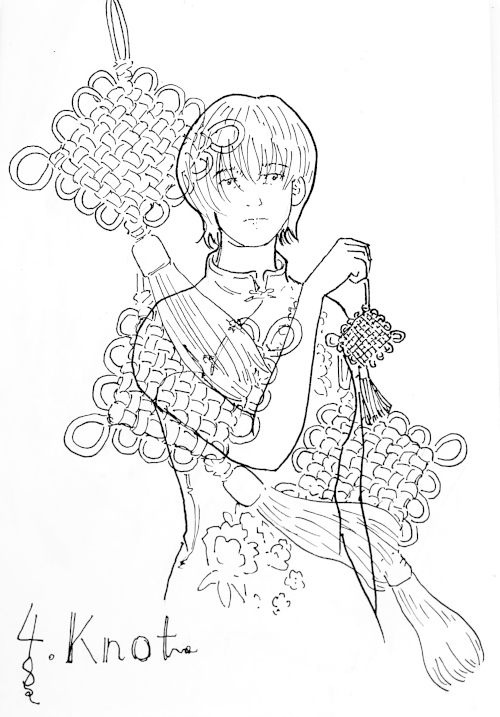 I had a choice between the Gordion knot or endless knots, I chose the latter. Used the line width to make sure the hierarchy of the lines is clear even though they overlap. 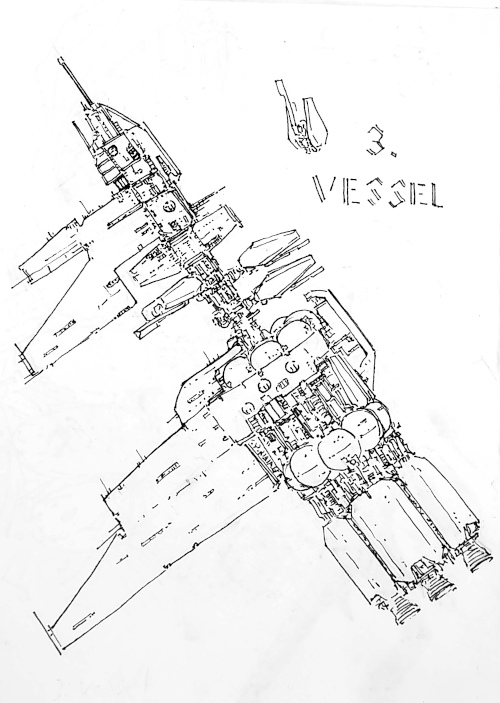 A hard sci-fi space ship. I used a technique from Star Wars, in which there are small details (called greebles) in between the empty spaces to imply scale. 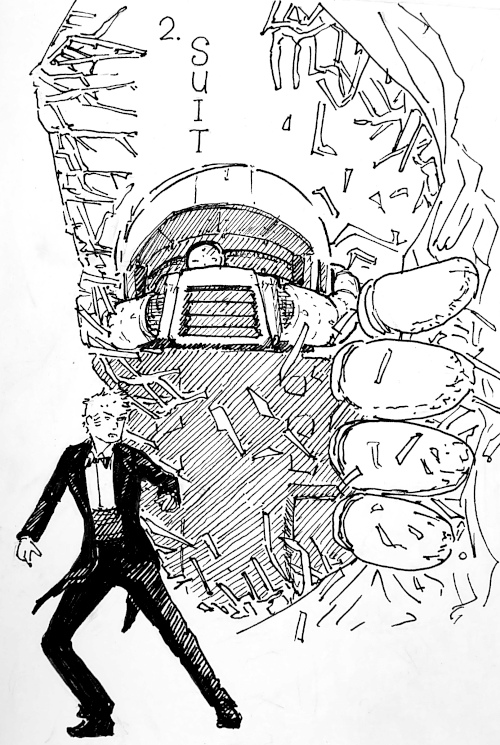 Tuxedos and Mobile suits. I have built enough model kits to be able to draw a Zaku II from memory. 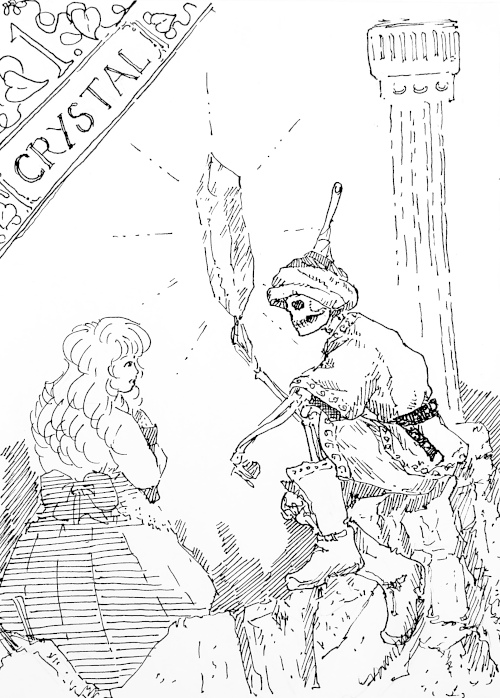 Wanted to do something a bit fairy tale. The skeleton design is based on an illustration that I found in an old copy of "The Rubbaiyat of Omar Khayam"