Protomechs were first introduced to the Battletech boardgame in Technical Readout: 3060, smaller, more agile and easier to produce their larger cousins the Battlemech, I was really on board with the concept when I first heard about them. They also had some pretty interesting plot hooks like the pilot interface slowly driving their pilots insane and some plot by the scientist caste to use them against the Clan warrior caste. But I lost interest in them almost immediately after seeing at the official artwork, to put it short the original batch of protomechs looked like something out of the 2nd Edition D & D Monster Manual. They had this weird organic and mythological look to them that was really out of place in the sci-fi world of Battletech.


One day (I think it was in 2019) I had the urge to redesign them and get them a bit closer to how I would have imagined them. Taking some inspiration from Japanese designers like Kunio Okawara's Votoms Armoured Troopers and Kow Yokoyama's Mashinen Krieger, I redrew the whole set of 8 original protomechs. I interpreted Doug Chafee's original artwork as illustrations drawn from second hand accounts and fuzzy gun camera footage with a good amount fo propaganda thrown in, so that gave me some leeway in redrawing the proportions and details of the machines. Here they are with some notes about my thoughts during the design process. 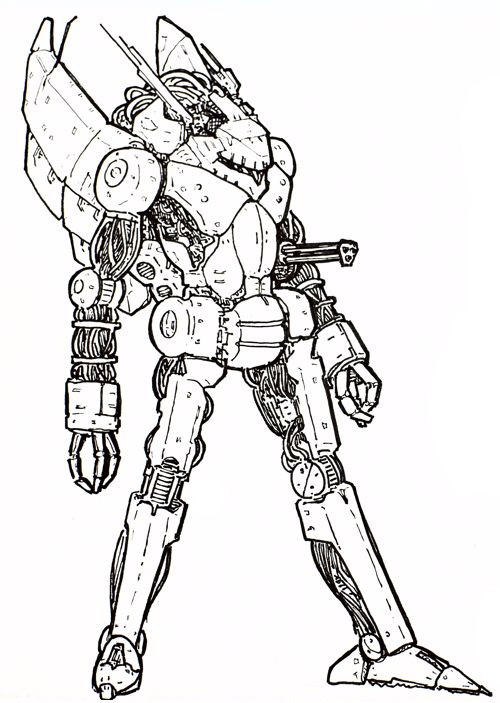 Original design here
The Harpy had some cool ideas, the unfinished exposed look, clawed hands and all those cables were really cool. But it did have a strange goofy round rodent like face that didn't fit the theme at all. I redesigned the wings to look more like the Spider Battlemech to maintain some visual consistency with the setting. The mass of unsecured cables on its back were made to look like they actually connected to something. I also made the "mouth" smaller and into the main visor and got rid of the two "ear" antenna dishes (replaced with other sensor arrays) to give it a more imposing visage. 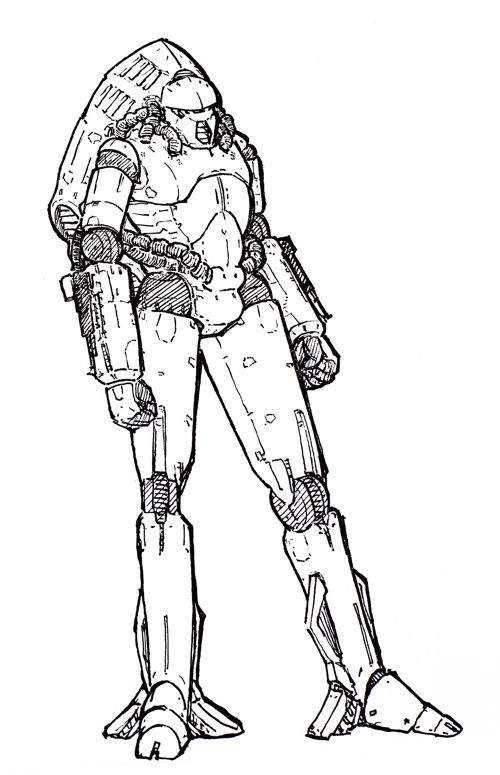 Original design here The Siren had a a strange functionless "mouth" and two large jumpjets sticking out the back of its head. The round "mouth" hole was replaced with a hexagonal intake and the face was given a more helmet like design, more details were added to the jump pack so it would look more functional. I also added exposed cables because they look cool and it helped to establish some visual continuity with the rest of the protomechs. The proportions were altered so the its was a bit tougher yet feminine looking. 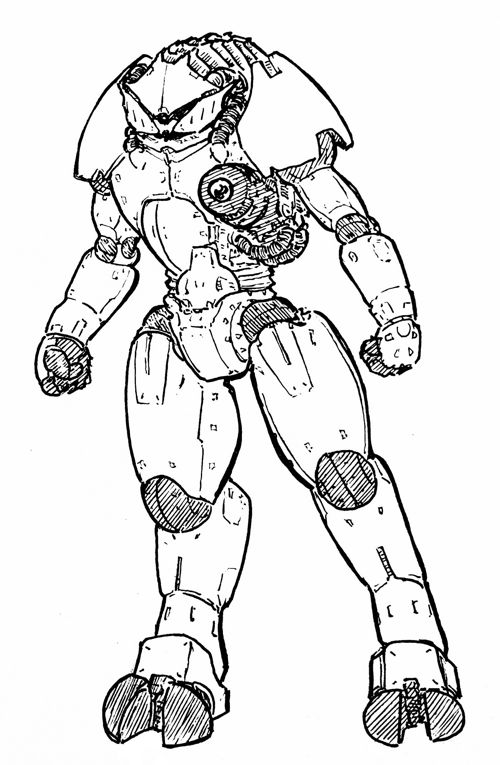 Original design here This is the last one that I drew because honestly I forgot that it existed (The game stats aren't really all that impressive). The Satyr is an odd one in the original protomech lineup, while other protomechs look too much like their mythological inspiration to a fault, the Satyr has almost no cues that resemble a Satyr. It had an orcish kind of face, which I redesigned as an armored sensor array, then the torso was redone and made assymetrical to accomodate the torso mounted laser, the digitigrade legs were emphasised and the toes were redesigned into cloven hooves to keep with its mythological inspiration. The proportions were totally altered. While I wasn't a fan of the original design, I was quite happy with how this one turned out. 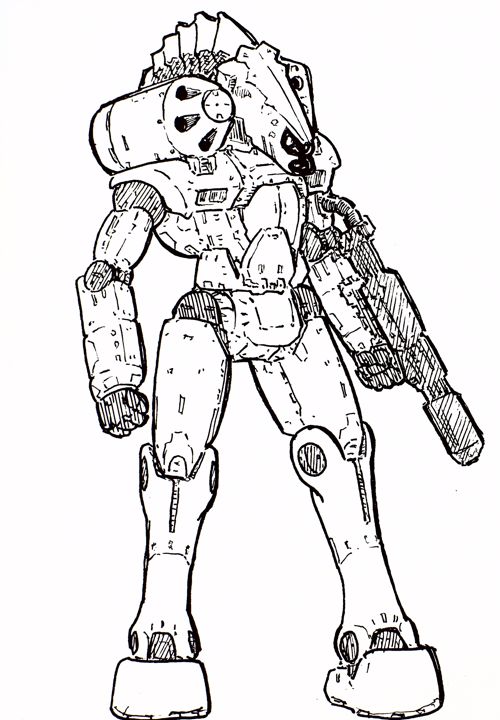 Original design here The centaur had a pretty decent design, but I didn't want to stick too closely to it. By now I had standardised a rounded cockpit hatch that all the redesigns shared to suggest the womb like cockpit set ups in the fiction. I used this to fill in the torso details that had been obscured in the original design. Instead of the very obviously horse face of the original, I took some inspiration from a horse skull and used that form as a base, then I placed a sensor array where the 'nose' should have been. The 'eyes' of the original were removed and replaced by markings, keeping the suggestion of a horse design but not being too on-the-nose about it. 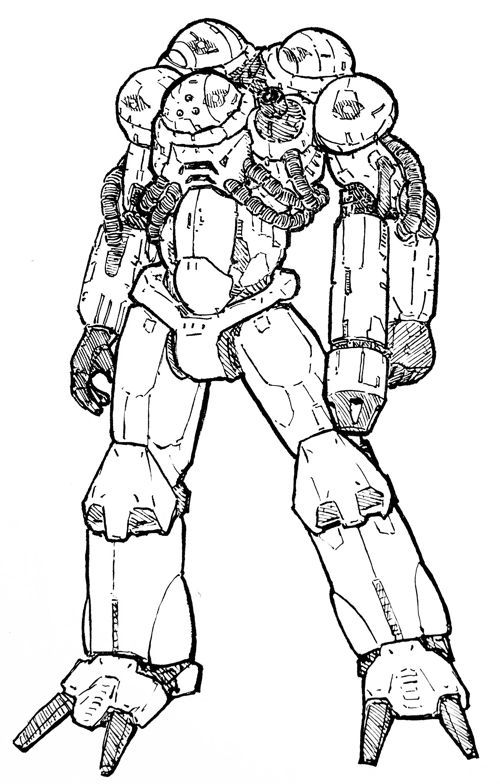 Original design here I could see what the original design was going for, the round shapes on top of the torso kind of resemble multiple heads. So I used that for the basis of this redesign and expanded on that concept. The shoulder pads, head, backpack and torso mounted laser were made rearranged into a close cluster of similar shapes. Instead of physical eyes markings were placed on each head to emphasise it even more. Exposed cables were used to suggest a snakiness to the design. This was my favourite redesign, the problem solving was very fun. 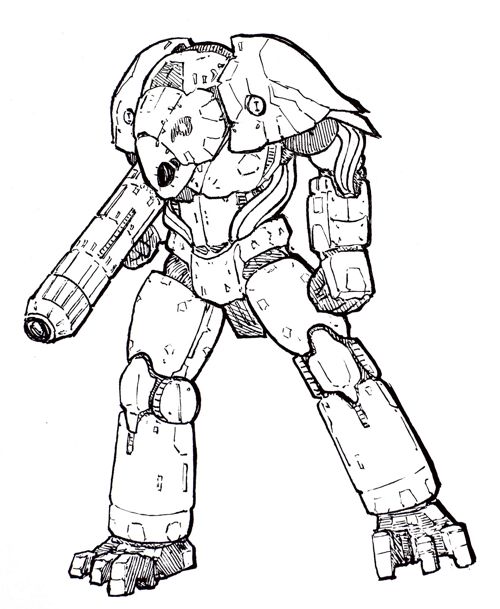 Original design here This was the first protomech that I redesigned for this project, so it didn't have as many visual elements that tie it the other designs. Instead of the Monster Manual face of the original, I put a sensor array where the mouth was and replaced the physical eyes with Maschinen Krieger inspired eye markings. The shoulder pads were toned down a bit and the exposed cables were given a more flat look so they suggested feathers. Overall it wasn't that large of a redesign. 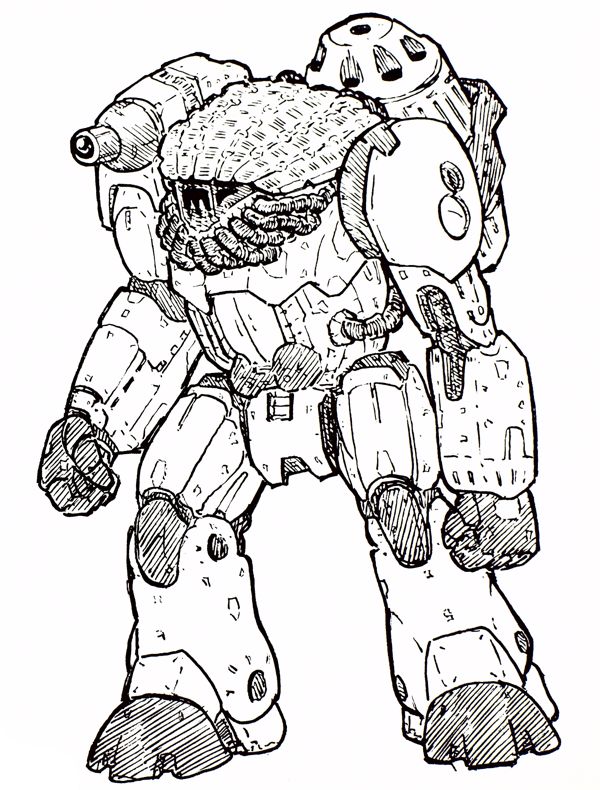 Original design here The Gorgon had a very interesting design, I quite liked the original. But I tried to do a spin on it since that was the goal of this project. Instead of the very organic head, I replaced it with a boxier armored heat sink like structure. The exposed cables were emphasised and the shoulder laser was redesigned to include more of a turret. Nothing much else was changed. I think this was the last redesign I did for this series. 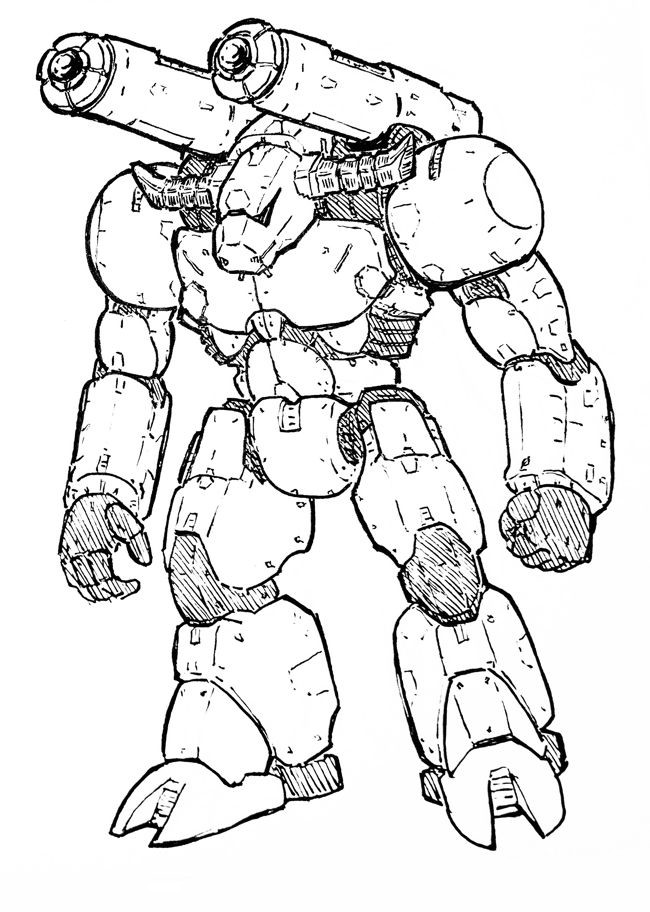 Original design here The Minotaur was an interesting case when I look back on it. I both changed and kept everything. All the details and proportions are different, but the main features remained unchanged. I gave it longer arms and a bigger upper torso to emphasise its heavy armor and toughness.